About Chlorhexidine: Mechanism of Action

Chlorhexidine is a broad-spectrum biocide effective against Gram-positive bacteria, Gram-negative bacteria and fungi. Chlorhexidine inactivates microorganisms with a broader spectrum than other antimicrobials (e.g. antibiotics) and has a quicker kill rate than other antimicrobials (e.g. povidone-iodine).1 It has both bacteriostatic (inhibits bacterial growth) and bactericidal (kills bacteria) mechanisms of action, depending on its concentration. Chlorhexidine kills by disrupting the cell membrane.22 Upon application in vitro, chlorhexidine can kill nearly 100% of Gram-positive and Gram-negative bacteria within 30 seconds.10 Since chlorhexidine formulations can destroy the majority of categories of microbes, there is limited risk for the development of an opportunistic infections. 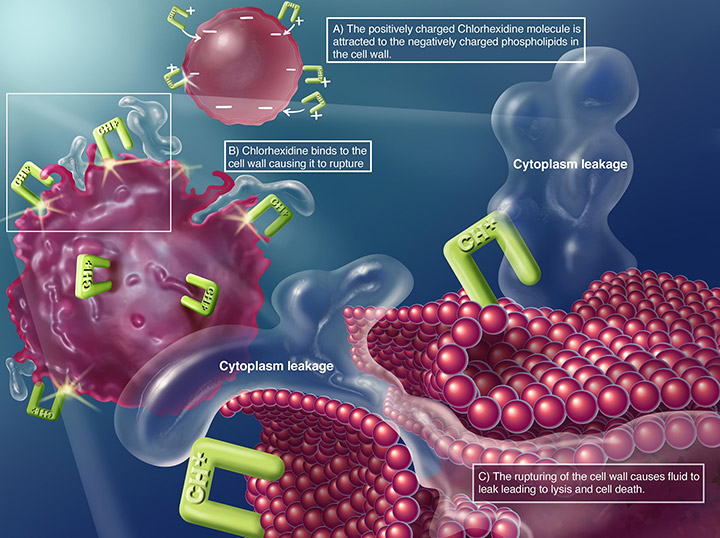 The mechanism of action for fungi is very similar to bacteria. The fungus uptakes chlorhexidine in a short amount of time1 and impairs the integrity of the cell wall and the plasma membrane entering the cytoplasm resulting in leakage of cell contents and cell death.1

Biofilms are a complex aggregation of microorganisms growing on a solid substrate. They can occur on organic (e.g. dental plaque) or inorganic surfaces. Biofilms are characterized by structural heterogeneity, genetic diversity, complex community interactions, and an extracellular matrix of polymeric substances. This matrix protects the cells within it and increases their resistance to antimicrobials. Many antimicrobial agents have a difficult time eliminating organisms in a biofilm. Chlorhexidine has shown some ability to help inhibit adherence of microorganisms to a surface thereby preventing growth and development of biofilms.6

Unlike other antimicrobials, chlorhexidine has demonstrated some effectiveness against microorganisms in other forms and states as well. This includes bacterial spores and protozoa.1

MECHANISM OF ACTION IN HEALTHCARE APPLICATIONS

In topical applications, chlorhexidine is shown to have the unique ability to bind to the proteins present in human tissues such as skin and mucous membranes with limited systemic or bodily absorption.24 Protein bound chlorhexidine releases slowly leading to prolonged activity. This phenomenon is known as substantivity6 and allows for a longer duration of antimicrobial action against a broad spectrum of bacteria and fungi.

In fact, chlorhexidine's antimicrobial activity has been documented to last at least 48 hours on the skin.14 Unlike povidone-iodine, chlorhexidine is not affected by the presence of body fluids such as blood.12

In oral applications, chlorhexidine binds to the mouth tissue, oral mucosa and teeth. It is then released over time to kill bacteria and fungi.5 This helps to reduce the bacterial count and prevents dental plaque. It has become the gold standard in dentistry due to its ability to adhere to soft and hard tissue and maintain a potent sustained release.26 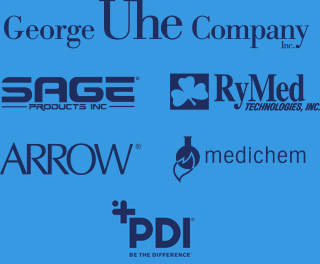